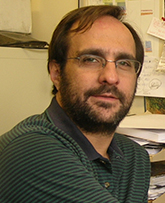 Dr. Luis Buatois obtained his degree in Geology at the University of Buenos Aires and got his PhD at the same institution. In 1994, he received a degree in Philosophy, with a focus on Philosophy of Sciences (University of Tucuman). From 1994-1998 he was a postdoctoral fellow with the Kansas Geological Survey. He returned to Argentina in 1998 becoming a Researcher at the Argentinean Research Council. In 2004, he joined the University of Saskatchewan, where he is a Professor. He specializes in paleoenvironmental, stratigraphic, and evolutionary aspects of ichnology. He has been Vice-President of the International Palaeontological Association and President of the International Ichnological Association. He has carried out field and subsurface work worldwide, including Canada, United States, Costa Rica, Trinidad and Tobago, Venezuela, Colombia, Ecuador, Bolivia, Brazil, Argentina, Chile, Antarctica, Spain, Switzerland, Romania, Ukraine, Australia, China, South Africa, and Namibia. Luis has published six books. He has edited three journal special issues, and is the author of approximately 250 scientific papers. He is also a member of the editorial board of a number of journals, including Sedimentary Geology, Marine and Petroleum Geology, Lethaia, Ichnos, Ameghiniana, Journal of Iberian Geology and Spanish Journal of Paleontology.