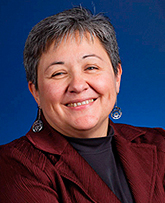 Laura Gallardo is an Associate Professor at the Geophysics Department (DGF), University of Chile since December 2007, and she is the Director for the Center of Excellence for Climate and Resilience Research (http://www.cr2.cl/). She got a PhD in Chemical Meteorology at Stockholm University (MISU) in 1996 working on lightning emissions of oxidized nitrogen under the guidance of Prof. Henning Rodhe. She returned to her home land Chile in 1997 where she worked as an expert advisor for National Commission for the Environment (now Ministry for the Environment) between 1997 and 2001, leading the first regional scale dispersion modeling studies in Chile, with emphasis on oxidized sulfur from copper smelting. In early 2002 she got a researcher position at the Center for Mathematical Modeling (CMM), where she begun studies on inverse modeling applications for constraining city-scale emission inventories, data assimilation and optimal network design. In December 2007, she got a permanent position at DGF. Her research interests are broad and cover atmospheric modeling and data assimilation, tropospheric ozone, air quality in mega cities, and lately short-lived climate pollutants/forcers. She has been the leader for a scientific network and project studying South American Megacities (SAEMC, 2006-2012). Currently she acts as Director for the Center for Climate and Resilience Research (CR2), a center of excellence intended to deepen our understanding of climate system, its natural and anthropogenic changes and its consequences on society. Laura Gallardo is the co-convener of the Pollution and its Impact on the South American Cryosphere (PISAC) initiative, and co-coordinator of the Prediction of Air Pollution in Latin America (PAPILA, 2018-2021), an international network funded b the European Union. She has served as a member of the Scientific Committee of the International Global Atmospheric of Chemistry (IGAC) for the period 2003-2009, and as a member of the international Commission for Atmospheric Chemistry and Global Pollution (iCACGP) since 2006. In 2010 she was elected as vice-president for iCACGP, and in 2015 she has been elected as vice-president for the International Association of Meteorology and Atmospheric Sciences (IAMAS). Also, she serves in the Scientific Steering Committee of the Surface Ocean Land Atmosphere Studies (SOLAS). Recently, she has been convened as lead author for the upcoming Intergovernmental Panel for Climate Change (IPCC), in the chapter on short-lived climate forcers. She teaches courses on atmospheric chemistry, modeling and global change, inverse modeling, atmospheric science and introductory physics at University of Chile. She has guided multiple theses in engineering and atmospheric science in Chile. Roughly half of her students have followed research programs and scientific careers abroad.