A prominent geologist and university professor, he became of the most notable paleontologists and stratigraphers in Chile contributing significantly to the development of geological sciences at the national and international level. Regarding his scientific work, in addition to his contribution to paleontological and stratigraphical knowledge of numerous geological formations, he excelled in the consolidation of the Chilean Geological Journal (currently “Andean Geology”) as the only journal with ISI indexation in the southern Cone, which led to his designation as Editor Emeritus. In the academic field his prevalent work and role in the training of the first generations of geologists in Chile was connected to the University of Chile, particularly to the Department of Geology of the Faculty of Physical and Mathematical Sciences.

His academic career started with a position as Assistant for the course on Paleontology of Invertebrates and Stratigraphy. Later on, he joined the academic staff as a Professor of General Geology, emphasizing lab and field practice that were complemented with specific and detailed guides, many of which are still used today by his former students in their own academic activities. He taught Invertebrate Paleontology and gathered an important collection of national and international specimens, replicated in molds, in order to enable their study by the students and creating a library for the Paleontology and Stratigraphy Area. He contributed to the design of the curricular structure of the first undergraduate programs in Geology and collaborated in the area of Paleontology and Stratigraphy, laying the foundations for the formation of future paleontologists through scholarships destined to the procurement of the academic degree of Geologist. He was an adviser for the Department of Geology, member of the Superior Regulatory Council and of the Commissions of Investigation and Revalidation of titles and degrees of the Faculty of Physical and Mathematical Sciences

As many other Chilean scientists, his career was affected by the difficult working conditions that severely impacted Chilean universities in the 1970s and 1980s. In 1976 his position as a researcher at University of Chile was cancelled due to “budget” considerations. By then, his work had left a profound mark in his Geology students. Proof of this impact is the letter signed by 93 students stating “we are aware that a significant part of the level of excellence reached by the teaching activities in the area of Paleontology and the recognition it has by many professors of this Department and by ourselves, is due to your selfless, permanent and generous work which has resulted to the benefit of our professional training and the prestige of our career”. This solidary sign by the students surely is the best acknowledgement to his professional and human quality.

Following his University years, he joined the Department of General Geology at the Institute for Geological Research – since 1981 the National Service of Geology and Mining – where he was Head of the Paleontology and Stratigraphy Department since 1990 until his official retirement in 2008. In this position, and as a contribution to the Chilean basic geological cartography, he focused his research in bivalves known as ‘trigonies’ (Trigoniida Order), which is recorded in over 30 scientific articles and 110 unpublished paleontological reports, where he also described new paleontological species. One of his most significant legacies is the conformation of what he named as the ‘Chilean Paleontological Library’, a collection of over 5.800 scientific texts that brought together through effort and dedication and donated to Sernageomin in 2011. Furthermore, he was the main author of a catalog of type species kept at Sernageomin. He was also responsible for a synthesis of scientific contributions generated until 1995 at the mentioned institution.

In 2012 he was the well-deserved awardee of the Merit Medal ‘Juan Brüggen’ presented by the Chilean School of Geologists to honor his scientific career. Don Ernesto will be remembered with deep gratitude by those who learned from this professional quality and from his vision on nature and humanity which we share. 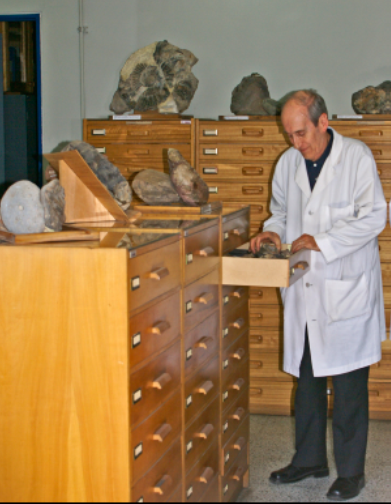 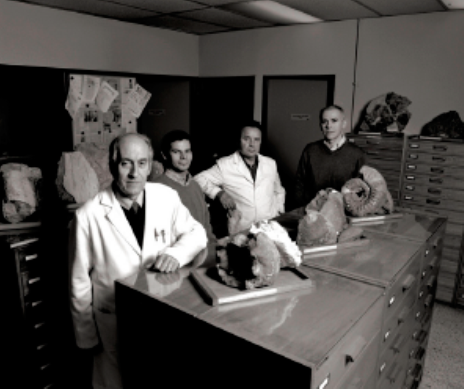